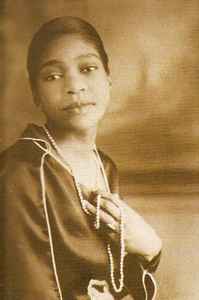 Nicknamed the "Empress of the Blues", she was considered by many to be the greatest blues singer of all time. She was also a successful vaudeville entertainer who became the highest paid African-American performer of the roaring twenties. Bessie died from injuries sustained in a car crash. Her arm which was probably hanging out the car window was almost severed at the elbow. Her grave was unmarked for 33 years until Janis Joplin paid for her headstone in 1970. Half-sister of Diamond Teeth Mary.