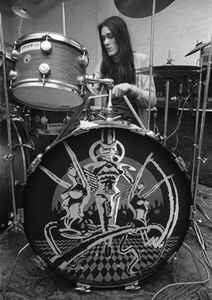 King joined Hawkwind in 1972 as a second drummer alongside Terry Ollis. When Ollis left the band shortly afterwards King remained as the sole drummer. Hawkwind reverted to the double drummer line-up in 1975 when King was joined by Alan Powell. He left the band in 1978, rejoined for a tour in 1979, but quit again during recording sessions for the 'Levitation' album (his place being taken by Ginger Baker). King eventually left due to personal reasons in 1980. In 1982 he auditioned for the position of drummer on Hawkwind's "Choose Your Masques" album but was ultimately rejected. This decision led him to leave the music business completely.

In 1985, the music newspaper 'Sounds' described King as the 'definitive rock drummer'.