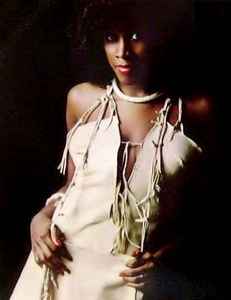 Real Name:
Alma Faye Brooks
Profile:
US-Canadian singer and songwriter born in Tyler, Texas, U.S. ca. 1953 then moved to Montréal, Canada ca. 1964 where she was raised by her mother.
Her first hit was a cover of "Stop, I Don't Need No Sympathy", a song that Lyn Roman had sung in 1973.
Her biggest hits were "It's Over" and "Don't Fall In Love", both from her 1979's solo album.
She was twice a nominee for the Canadian Juno Awards in the category "Most Promising Female Vocalist" in 1978 and 1980. She is married to Louis Toteda
Variations:
Viewing All | Alma Faye
A. F. Brooks, A.F. Brooks, Alma, Alma Faxe Brooks, Alma Fay Brooks, Alma Fayc, Alma Faye Brooks, AlmaFaye Brooks

August 22, 2021
Her album, "Doin' It" is a terrific collection of disco tracks, most written by Alma with various partners. Good production and sound quality on the Unidisc CD release is excellent.