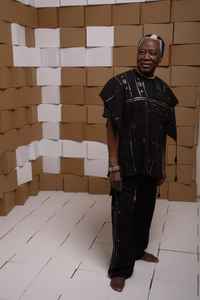 Profile:
A pivotal figure in the history of Malian music, Sorry Bamba was a popular and influential musician whose work bridged the gap between Mali's cultural traditions and the new freedoms of the post-Colonial era. Bamba was born in 1938 in Mopti, a city crossed by the Niger and Bani rivers and known for its cultural diversity. Bamba's father was a distinguished veteran of Emperor Samory Touré's military and a nobleman in Malian society; however, this meant young Sorry was forbidden to make music, as under the nation's caste system, music was an art form reserved for the Griots. However, the death of Sorry's parents when he was ten threw his life into chaos, and he found solace in music, initially teaching himself to play a simple six-holed flute. In his teens, he developed a taste for a rich variety of music -- traditional Malian music, highlife from Ghana, local accordion master Toumani Touré, Corsican vocalist Tino Rossi, and Luis Mariano, a singer from Spain's Basque country -- who would influence his later work. In 1957, Bamba formed his first band, Group Goumbé, named for a dance style then popular along the Ivory Coast; the band featured Bamba on trumpet, an instrument he was still teaching himself to play, and a handful of percussionists. Group Goumbé developed a loyal youth following through aggressive self-promotion, and after Mali gained its independence from France, Bamba and his group benefited from a new openness toward local music on the state-run radio network Radio Mali. Group Goumbé evolved into a more sophisticated ensemble, Bani Jazz, whose ambitious music was married to lyrics influenced by folk tales of the Dogon people. As Mali established nation-wide Youth Week competitions to give music and dance troupes an opportunity to show their talents, Bani Jazz and Bamba's later ensemble, the Kanaga Orchestra, won three biennial trophies as Mali's best band (in 1976, 1978, and 1980), and their fusion of Latin jazz, Western R&B and funk, and traditional Malian styles made them a favorite across the nation. Bamba was also the director of a dance troupe in Mopti as well as a second group strictly devoted to traditional music. As Mail's national support of music fell to the wayside, Bamba relocated to Paris in the '90s, where he continues to write and record music. In 2011, the American independent label Thrill Jockey Records released Sorry Bamba, Vol. 1: 1970-1979, a collection of classic recordings from Bamba's back catalog compiled with the participation of the artist himself.
Sites:
allmusic.com
In Groups:
L'Orchestre Kanaga De Mopti, Orchestre Régional De Mopti
Variations:
Viewing All | Sorry Bamba
S. Bamba, Sori Bamba, Sorry Bamba Du Mali, Sorry Bamba Du Mali, Sory Bamba, Sory Bamba Du Mali, ソリ・バンバ