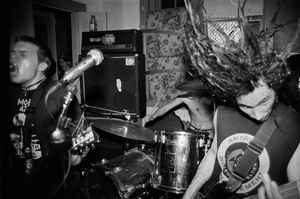 Profile:
Defunct crust punk band from Memphis, Tennessee. Their lyrics focused around a myriad of topics, such as racism in modern America, paranoia, poverty, forced institutionalization, anti-consumerism, and political anarchism. They were also known for their questioning of technology and its effects on the human condition, which might explain their lack of any formal online presence.

Sonically speaking, His Hero Is Gone played at both incredibly fast and contrastingly slow tempos, often times showcasing their ability to stop and start on a dime. Much of this strand of crust punk was influenced by hardcore bands of the 80's and early 90's, as well as their contemporaries in the sludge/doom metal underground. His Hero Is Gone formed in 1995, and broke up sometime in 1999, before the turn of the century.

Some members moved on to Tragedy, as well a few other bands.