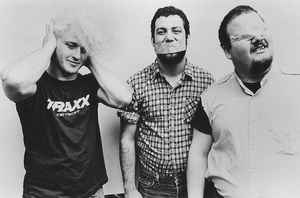 Profile:
The Minutemen were a band from San Pedro, California, formed in 1980 by childhood friends Dennes "D." Boon (vocals, guitar) and Mike Watt (bass, vocals) following the break-up of their previous band, The Reactionaries. Although technically considered a punk rock band, the group frequently added elements of funk and jazz into their songs and would also incorporate classic rock covers into their records and live sets, most notably covering Steely Dan, Van Halen, Creedence Clearwater Revival, and Blue Öyster Cult (the latter two were huge influences on a young Boon and Watt). The band was known for the brevity of their songs, freeing them from solos, choruses, breakdowns, and fade-outs. Also, D. Boon was known for his very trebly guitar tone, believing in a "democratic" sound, in which all instruments would sound distinct and be equally represented.

Boon and Watt had wanted to include Reactionaries drummer George Hurley when the Minutemen formed, but he had immediately joined another band (Hey Taxi) following the Reactionaries demise, so instead they recruited a local welder named Frank Tonche to play drums. The Minutemen played their first show with Black Flag and the two bands would develop a close relationship. Tonche quit after the group's second show, disliking the punk audiences that the band played for, and Hurley opted to join the band (a collection of recordings with Tonche, called "Georgeless", was released on 7" vinyl in 1993). While D. Boon would sing the majority of the songs, all 3 members contributed to the songwriting. The band was extremely prolific, issuing 4 LPs and 6 EPs in 5 years, and also appearing on numerous compilations. Their 1984 double LP, "Double Nickels On The Dimes", is their most critically well-received release. Most of their work was issued via Black Flag's SST Records and the band's own label, New Alliance Records.

The Minutemen came to end on December 22, 1985, when D. Boon, at age 27, was killed in automobile accident in Arizona. The following year, a collection of live recordings called "Ballot Result" was released by SST. Following Boon's death, Watt sold New Alliance to SST Records. In 1987, a Minutemen fan named Ed Crawford encouraged Watt and Hurley to form a new band with him. The band, fIREHOSE, existed until 1994. Since then, Watt and Hurely have played with various bands and sessions and Watt has also released several solo albums. In 2005, Watt and Hurley reunited again in an improve rock group called Unknown Instructors.

A documentary on the band, called "We Jam Econo (The Story Of The Minutemen)", was released in 2005 and featured interviews with Watt and Hurley, along with a number of friends and contemporaries, including Chuck Dukowski, Henry Rollins, Ian MacKaye, John Doe (2), Kira Roessler, and many others.
Sites:
Wikipedia
Members:
D. Boon, Frank Tonche, George Hurley, Mike Watt
Variations:
Viewing All | Minutemen
Minute Men, Minutemen, The, The Minute Men, The Minutemen, minutemen

Some stuff from an SST press releases c. 1986 that never came out:

“Pre-Mersh” was a planned UK only compilation release featuring early material up to Double Nickels.

Artists I wanna check out by Plasnes
(I’ve got) RECOMMENDATIONS by patricepatrick
Favorite Artists by soulchap
Acts I have seen live by daisydog
Some Of My Favourites by piharrod
Favorite Artists by aeonpharos
“The Encyclopedia Of Punk” by crimsonmetal74
POST-PUNK 1978-1985 with NO SYNTHS by tele52
Favorite artists by patlebouc
Folks I've Seen Live by rexjwb
Bands I Saw Before I Turned 21 by mr.dna
Great music, Weird Music, Important Music by Laughing_Chaos
Favorite Artists by 24trackloop
VISIONARIES, TRAILBLAZERS, OUTLAWS, SONIC ASTRONAUTS, WITCHES, WIZARDS, SLUDGELORDS, VIXENS, NOISE MONGERS, GENIUSES & BEAUTIFUL WEIRDOS that you should hear before you die. by GonzoZoltard
Artists in My LP Collection by sillypenta
Cool Bands & Solo Artists by SimoniousC
Influences by NickJRG
San Francisco Art Punk Scene - Artists by ksdfjsldfj
Favorite Artists by Joost1965
Favorites, in no particular order by shimstock
Favorite Artists by Bannor99
View More Lists →