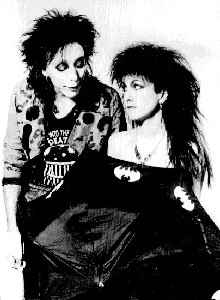 May 21, 2018
I have been a fan of Alien Sex Fiend since I first heard them in 1983 .
They are very hard to classify in a music category , but Nik Fiend himself
has said in their video Liquid Head In Tokyo , that they are
Positive Punk and I have to agree with him and I will always refer to
Alien Sex Fiend as a Punk group .

Alien Sex Fiend has and always will be my go to group for most of my
musical needs in my life .
I could even put together a Soundtrack of my life with the wide range
of their songs .

If you haven't seen Alien Sex Fiend live , you are missing out on a
Great time and performance .

April 12, 2012
I grew up on this shit in the 80's and I still love it. Really innovative, dark and fun stuff. I find it hard to fit it into a set genre even though the temptation is to call it industrial.