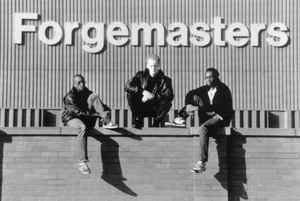 Profile:
Trio from Sheffield, UK, whose seminal "Track With No Name" became the historic first single release on Warp; engineer Gordon was one of the three founders of Warp Records (alongside Steve Beckett and Rob Mitchell), while Hazel and Maher went on to have later singles on the label as parts of (respectively) The Step and Tuff Little Unit.
Members:
Robert Gordon, Sean Maher, Winston Hazel
Variations:
Viewing All | Forgemasters
The Forgemasters