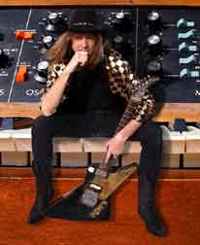 Unlike Ayreon, albums do not follow one storyline; instead, each song is a different story with a sci-fi concept, most of the tracks based on existing movies and series. The band takes its name from the second season finale of Blake's 7. The band includes four singers alternating in all the songs, not including Lucassen, who sings occasionally, plays all guitars and keyboards and is writing and composing all the songs.
Sites:
arjenlucassen.com
Members:
Arjen Anthony Lucassen, Damian Wilson, Dan Swanö, Ed Warby, Floor Jansen, Joost van den Broek, Russell Allen
Variations:
Viewing All | Arjen Anthony Lucassen's Star One
Arjen Lucassen's Star One, Star One