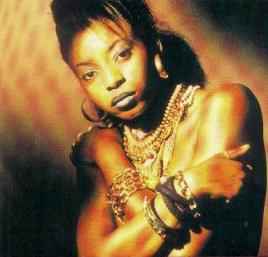 Real Name:
Felly Kilingi
Profile:
Felly was a model/dancer asked to 'front,' Technotronic, as it was believed actual singer/rapper Ya Kid K was not photogenic enough and, being only 17 years old and still in school, unable to do the Technotronic live shows. Felly appeared in the "Pump Up The Jam," video lip-synching the lyrics, though it was actually Ya Kid K doing the vocals. In fact, Felly's voice did not actually appear on any Technotronic tracks, and any vocals credited to her are false. It was around the success of "Pump Up The Jam," that both the Milli Vanilli and Black Box lip-synching scandals happened, so the video for Technotronic's next international hit, "Get Up (Before The Night Is Over)," featured Ya Kid K doing vocals, with Felly relegated to dancing in the background, though the singer's role was clearly the same as that on "Pump Up The Jam."

Felly left the group soon after and embarked on a very brief and unsuccessful solo career using her own vocals.
In Groups:
Technotronic
Variations:
Viewing All | Felly
Feely, Felly Kilingi, Felly Killingi, Kelly