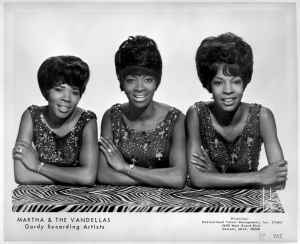 Profile:
Martha Reeves & the Vandellas were an american vocal group. They were one of the most successful groups in the Motown roster during the 1960's performing primarily soul, but also pop and rock'n'roll.

In 1967 the group's name was officially changed from Martha & The Vandellas to Martha Reeves & The Vandellas, to conform with the company's recent changes of The Supremes and The Miracles's names to profile their featured lead singers.