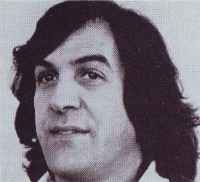 Profile:
Percussionist in the 1960s-1980s, born March 26, 1940 and died on 14 January 1988 from leukemia.
In less than a decade he had played on hundreds of albums, including Roxy Music, Peter Gabriel, James Taylor (2), Alice Cooper (2), John Lennon, The Jacksons and Talking Heads. During the golden years of the disco era he worked with the remix team of Michael Barbiero and John Luongo.

Barely out of Junior High School, his first group was a doo-wop street corner quintet called The Velons. By the early sixties, he had become an excellent percussionist, playing almost exclusively with Latin bands around New York.

Jimmy became lead singer, percussionist and founding member of Ambergris (2), and played with them for a few years. For the next two or three years, he worked with several bands and did session work. By the mid seventies, his career took off.

Jimmy's playing became so crucial to obtaining a certain sound that artists began recognizing his contribution. Both The Doobie Brothers' "What A Fool Believes" and The Jacksons' "Shake Your Body" credit him not just on the back covers but on the record labels themselves.