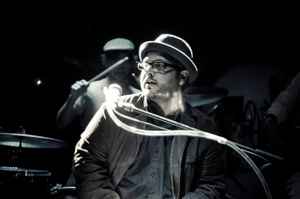 Profile:
Singer-songwriter and producer, born in Caracas, Venezuela in 1978. His sound blends Rythm and Blues and Folk music with a Latin twist. Emerges as one of the voices to be heard in the Latin American Indie music scene. On March 13, 2017, releases Espiral, his most recent studio recording. Produced together with Max Martinez, featuring great Venezuelan talents such as Gonzalo Teppa, Edward Ramírez, Boston Rex and Manuel Rangel among others. Includes the single Alberta and a very special performance and songwriting collaboration with veteran musician and singer-songwriter Guillermo Carrasco

In 2014 premieres the project Sesiones En El Teatro, a series of live recording session performed from the legendary Teatro Cajigal in the city of Barcelona, Venezuela. For this session Alfred joined Max Martinez on the Drums, Jose Angel Regnault on the Guitar and Eduardo Guzman on the Bass, performs four tracks from the album Simple, his sophomore album released on 2012, eleven songs written and composed by Alfred and co-produced with Max Martinez and Jose Angel Regnault, this recording opened the doors to Venezuelan radio stations, earning the respect of the critics and the attention of a new listener niche. Includes the singles Si Es Amor, Ni Un Momento, Que Llueva and Tu Melodía, also a special collaboration with Cuban singer-songwriter Julio Fowler for the song Estrella De Mar. In 2013, the album was nominated for best Pop album of the year at the Pepsi Music Awards.

La Reina Peinándose released in 2008 is his debut album, this recording contains ten tracks where Soul and Jazz are amalgamated with Boogaloo, Hard Salsa and fusion elements. Buscando Olvidar, the ninth track of the album was included in the soundtrack of the film He’s Just Not That Into You.
Sites:
linktr.ee