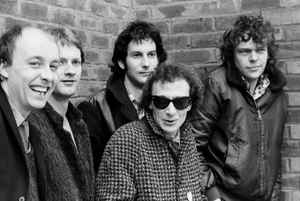 Profile:
English rock band in the late 1970s and early 1980s. They are best known as the backup band for Graham Parker, whose early records (from 1976 to 1980) were credited to Graham Parker & The Rumour. However, The Rumour were also recording artists in their own right.

They broke up at the end of 1980, but reunited as Parker's backing band in 2011, and have performed and recorded with Parker ever since. The band undertook a short final UK tour in October 2015, finishing with a final concert at the London Forum on 17 October 2015. At this show, the surviving members of the horn section also reunited, for the first time in 33 years.
Sites:
Wikipedia
Aliases:
The Duplicates (2)
Members:
Andrew Bodnar, Bob Andrews, Brinsley Schwarz (2), Martin Belmont, Steve Goulding
Variations:
Viewing All | The Rumour
Rumour, ザ・ルーモア