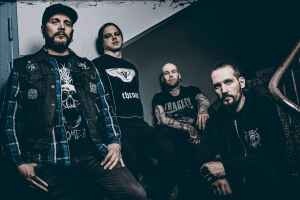 Profile:
A grindcore band from Vaasa, Finland, formed in 1993.

Rotten Sound plays music much in the same vein as grindcore pioneers Napalm Death and Extreme Noise Terror, lyrically attacking social ills such as greed, conformity and racism. The band has been praised mostly for its ferocity and relentlessness.