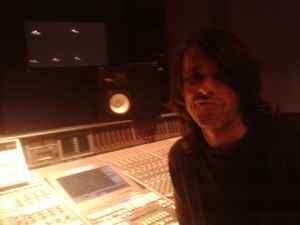 Real Name:
Gregory Robert Hunter
Profile:
Born in 1965 and brought up in West London, Greg Hunter started making music at the age of nineteen. Beginning his musical career with the purchase of a keyboard, he started playing in bands and doing gigs at festivals, and at the age of twenty-two begun working in a recording studio as a tape assistant. Whilst an engineer at Steve Levine's studio he met the Orb with whom he then went on to work with for several years. The Orb has been a major influence that Greg is all too ready to acknowledge. Having leant his hand to the studio work and remixing of their first two albums, the ambient influence and creation of electronic experimental music has continued throughout his career. He has a track record as studio engineer and (co-)producer for a wide range of artists including Culture Club, Depeche Mode, Siouxsie & The Banshees, Erasure, System 7, Steve Reich, The Mission, Tom Jones and Gene Pitney. And his multi-talented studio expertise has earned him the reputation of prolific remix engineer and led to his collaboration with artists such as Paul McCartney, Crowded House, Killing Joke, Youth and Juno Reactor. With Youth he worked on the Crowded House album Together Alone and produced Pandemonium by Killing Joke, in the field of dance music probably most noted was his engineering on the Orb albums Adventures Beyond The Ultraworld and U.F.Orb and his remix work with the band on Mike Oldfield's Tubular Bells II and several Yellow Magic Orchestra tracks. Subsurfing was Greg's first own artistic venture. His work with Youth and the Dragonfly record label laid the foundations for the trance element in his music that he continues to develop and expand, and also led to his fateful recording session in Cairo. Due to record vocals in the chamber of the Great Pyramid with Killing Joke, Greg met أمير عبد المجيد Amir Abdel Magid in a recording studio in Cairo. Amir is an Egyptian classical musician, producer and arranger of some renown in the Middle East. Due to record after Killing Joke he went in early to see just what had possessed the English band to come to Egypt. Listening in Amir liked what he heard and this musical appreciation was mutual as Greg later sat in on Amir’s session. The day before Greg was due to leave Amir asked him to mix a track. Excited by the result they decided to work together on a more permanent project. Greg returned to Cairo soon after and the duo worked solidly together for three months sowing the seeds for Alien Soap Opera and Fifth Sun. These projects came to flower over the course of the following four years as Greg moved between London and Cairo. In 1997 they were finished but financially things were difficult, as neither of them had a recording deal. Fortunately this was the year that MELT2000 label boss heard a tape of theirs played to him by Sheldon Isaac and in his own words, "it simply blew my top". He worked on "Matrix Reloaded" and "Matrix Revolutions" in 2003 then quit sound engineering to focus on creating music and live performance, created the record labels Dubsahara focused on arabic music, and Mutantra Records focused on electronica.
Sites:
Bandcamp, Bandcamp, SoundCloud
Aliases:
Az-Ra, Dubsahara, Metasurfing, Oïd Mü
In Groups:
Alien Soap Opera, Cloudcycle, DMT, Dub Trees, Fifth Sun, Killing Joke, Kreg, Sout El Leil (2), Spectralite, Subsurfing, Triplehead, Wåveshåper
Variations:
Viewing All | Greg Hunter
G Hunter, G. Hunter, G.Hunter, Greg, Gregory Robert Hunter, Grek Hunter, Hunter, Hypno Greg Hunter, Paul Hunter