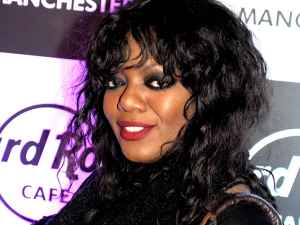 A noted guest vocalist for many artists and an integral part of A Certain Ratio’s live line-up since 1990 with over 200 appearances in 30 years. She also worked frequently with Primal Scream circa 1990 - 1996, with her most well known moment as lead singer on the acid house styled "Don't Fight It, Feel It" from Primal Scream - Screamadelica.

She was due to release her debut solo acoustic album, "Where Does It Go" on 25 September 2020.
Sites:
Twitter, Twitter, SoundCloud
In Groups:
A Certain Ratio, Fifth Of Heaven, The Joy
Variations:
Viewing All | Denise Johnson
D. Johnson, Denise, Denise J. Johnson, Denise Johnston, Johnson, Johnston

July 28, 2020
What a beautiful voice. 'Inner Peace' was a masterpiece of downtempo dance and I lost count of the number of times I'd be greeted by your name in the credits of an album's sleevenotes. RIP Denise.