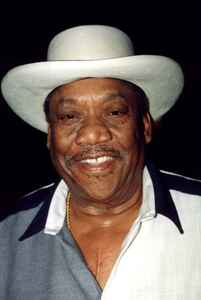 Real Name:
Robert Calvin Brooks
Profile:
Bobby Bland (born January 27, 1930, Rosemark, Tennessee, USA - died June 23, 2013, Germantown, Tennessee, USA) was an American blues and R&B singer. He was sometimes referred to as the "Lion of the Blues" and as the "Sinatra of the Blues".

In 1947, he moved to Memphis with his mother and started singing with local gospel groups there, including amongst others The Miniatures. Eager to expand his interests, he began frequenting the city's famous Beale Street where he became associated with an ad hoc circle of aspiring musicians including B.B. King, Rosco Gordon, Little Junior Parker and Johnny Ace, who collectively took the name of the "Beale Streeters". Between 1950 and 1952, he recorded unsuccessful singles for Modern Records (2) and, at Ike Turner's suggestion, for Sun Record Company — who licensed their recordings to the Chess label — before signing for Duke Records. When Bland returned to Memphis in 1954 he found several of his former associates, including Johnny Ace, enjoying considerable success. He joined Ace's revue, and returned to Duke Records, which by that time had started to be run by Houston entrepreneur Don Robey. Bland released his first single for Duke in 1955. In 1956 he began touring on the "chitlin' circuit" with Junior Parker in a revue called Blues Consolidated, initially doubling as Parker's valet and driver, roles he also reportedly fulfilled for B.B. King and Rosco Gordon. He began recording for Duke with bandleader Bill Harvey and arranger Joseph Scott (2), asserting his characteristic vocal style and, with Harvey and Scott, beginning to craft the melodic big band blues singles for which he became famous, often accompanied by guitarist Wayne Bennett (2).

His first chart success came in 1957 with the R&B chart no. 1 hit "Farther Up the Road", which also reached no.43 on the Billboard Hot 100, and followed it up with a series of hits on the R&B chart including "Little Boy Blue" (1958). He also shared an album with Parker, Blues Consolidated, in 1958. Bland's craft was most clearly heard on a series of early 1960's releases including "Cry Cry Cry", "I Pity The Fool" — an R&B chart no.1 in 1961 — and "Turn On Your Love Light", which became a much covered standard. Despite credits to the contrary — often claimed by Robey— many such classic works were written by Joseph Scott. His final R&B no.1 came with "That's The Way Love Is" in 1963. However, he continued to enjoy a consistent run of R&B chart entries throughout the mid-1960's. Never truly breaking into the mainstream market, Bland's highest charting song on the pop chart, "Ain't Nothing You Can Do" peaked at #20 in 1964. He had 23 Top Ten hits on the Billboard R&B charts. Joel Whitburn ranked Bland the 13th all-time R&B charting artist in his 1996 book "Top R&B Singles 1942-1995". Financial pressures forced the singer to cut his touring band and in 1968 the group broke up. His record company Duke Records was sold by owner Don Robey to the larger ABC Records group. This resulted in several successful and critically acclaimed contemporary blues/soul albums including "His California Album" (1973) and "Dreamer" (1974). The first single released from "His California Album", "This Time I'm Gone For Good" took Bland back into the pop Top 50 for the first time since 1964 and made the R&B top 10 in late 1973. In 1985, Bland was signed by Malaco Records, specialists in traditional Southern black music for whom he made a series of albums while continuing to tour and appear at concerts with fellow blues singer B. B. King.