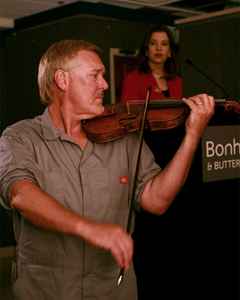 Profile:
American violinist who has played across many musical genres from jazz to classical and rock to country, soul and funk. As a session man he has played on recordings by Earth, Wind & Fire to Rod Stewart.

A child prodigy, Sid Page started on the violin when he was still in kindergarten. Playing his violin he won contests and by the time he was 13 years of age he had played with the Santa Rosa Symphony. He once had aspirations of becoming a teacher but after a year-and-a-half at college, he decided it wasn't for him. In 1969, Page was working as a shoe salesman when he met Dan Hicks in a Santa Rosa bar. He was a good salesman and his employer was sad to see him go when he left to join Dan Hicks And His Hot Licks. He said he could have his job back if things didn't work out.

By 1974, Page along with drummer Bill Lordan were the new faces in Sly & The Family Stone. His violin is heard throughout the album and is noted in Head Heritage's "Unsung" article about Small Talk as adding " an extra dimension of sweetness and warmth to the proceedings." As a member of the band, Page appeared with them on Soul Train performing "If You Want Me to Stay" and "Stand", The Mike Douglas Show in 7/74 performing "I Want to Take You Higher". One one Soul Train appearance, Page is playing his violin through a wha-wha device in the jam leading up to "Thank You (Falettinme Be Mice Elf Again)"

He played fiddle on the track "Superkicker" which appears on the 1978 album Fork In The Road album by Jay Boy Adams. He is credited in the strings section on the Love Lite album by Shadow (21) which was released in 1979 as well as Sister Power by Sister Power and many more.

In addition to performing on film sound tracks, he is also a concert master.