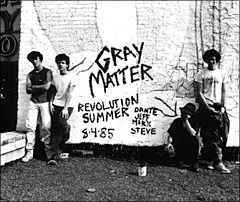 Profile:
DC based punk band affiliated with Dischord Records.The band formed in Summer 1983 and broke up in Spring 1986. They later got back together in 1990 and then broke up again in 1993. Members played in several other bands including Severin, Three, Iron Cross & Ignition.

null reference exception: line 2002 (EN, more than emo) by cactus2101
Artists In My Music Collection by ruido
Some Of My Favourites by piharrod
Burning Heads covered it by TwinPowerForce
View More Lists →