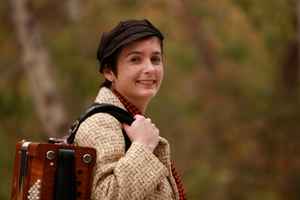 Profile:
Maria Dunn is a Canadian singer-songwriter. She has been described as "an arrestingly powerful singer-songwriter who writes great historical and social commentary." Her music blends Celtic folk with North American bluegrass and country influences.

Born in Scotland, she moved as a child with her family to Ontario. She has made Edmonton, Alberta her base since the 1990s.

As a child she studied classical piano and she later studied psychology at the University of Alberta. While a student at U of A she started a folk music program on the campus radio which she continued for 12 years. Immersing herself in folk music in this way, she gravitated towards writing her own songs. Her first album, From Where I Stand, was released in 1998 and her appearance at the 2000 Stan Rogers Folk Festival brought her to the attention of an East Coast Canadian audience that embraced her Celtic sound.

Since then she has released three other albums including the Juno nominated For a Song (2002). She appears at folk festivals around the world, often performing with The McDades. In 2003 she appeared at the BBC Scotland "Live From Celtic Connections" in Glasgow, Scotland. In 2008 she commenced a tour of the Netherlands.

She appeared in the 2002 documentary CKUA: Radio Worth Fighting For.[6] Many artists have used her songs such as Niamh Parsons (The Peddler), Bob Bossin (We Were Good People), Aengus Finnan (Orphan Hand), The Outside Track (Poor Lonesome Hen) and others.
Sites:
mariadunn.com
Variations:
Viewing All | Maria Dunn
Dunn