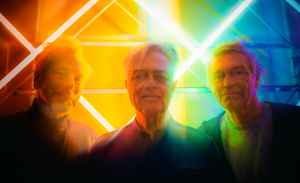 Profile:
Dutch progressive rockband, existed from approx. 1970-1974. Reunited in 2000, but in 2001 Sacha van Geest unfortunately died of a heart attack which meant the end for Supersister. Then they planned for a reunion as a three-piece band in 2010, but then Ron van Eck unfortunately died of cancer in 2011.
In 2018, Robert Jan Stips asked a bunch of old musical friends to make new Supersister-styled music, reforming the band once again, this time under the name Supersister Projekt, and they released a new album, entitled "Retsis Repus", in 2019. This album was also accompanied by three great gigs with all musicians that worked on the album, of which the former two took place in April of 2019, and the latter one in December the same year. A four-piece line-up of this new incarnation - consisting of Robert Jan Stips, Marieke Brokamp, Bart Wijtman and Léon Klaasse - went on a club tour in October that year, accompanied by some guests from the full album's line-up every now and then.
In the fall of 2021, the band reincarnated again as a three-piece - consisting of Robert Jan Stips, Rinus Gerritsen and Léon Klaasse - for a new tour, which got cancelled halfway through due to restrictions for the global pandemic and Stips himself catching the virus. This tour was continued in the spring of 2022.
Sites:
supersister.nl
Members:
Bart Wijtman, Charlie Mariano, Herman Van Boeyen, Leon Klaasse, Marco Vrolijk, Marieke Brokamp, Rinus Gerritsen, Robert Jan Stips, Ron van Eck, Sacha van Geest
Variations:
Viewing All | Supersister (2)
Super Sister, Super Sisters, Supersister Projekt 2019, Sweet OK Supersister, Sweet Okay Supersister, Sweet Okay Supersisters, The Supersisters

November 16, 2021
Supersister was led by keyboardist/singer Robert Jan Stips and is one of the most important Dutch progressive rock bands. They signed to John Peel’s Dandelion label in 1971 and remained a favorite of his. Their music is a light, jazzy style of progressive rock in the Canterbury style, close to Caravan, Hatfield and the North, Egg, and Soft Machine, but contemporaneous with or even a forerunner of them. Supersister had a woodwind player but generally no guitarist, and they delivered eccentric music with humor and all-around cleverness. Amazingly for a band that could be quite quirky, Supersister had chart success in The Netherlands, almost on a par with Golden Earring. Different times those were, and interesting to note that the Dutch bands developed earlier than most of the other continental European bands, possibly due to being within radio range of England?
Reply Notify me Helpful