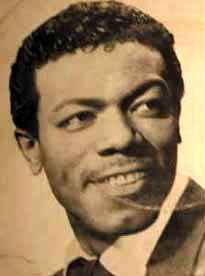 Real Name:
Earl Solomon Burroughs
Profile:
Earl Solomon Burroughs (b.September 16, 1925, New Orleans, Louisiana, USA – d.April 8, 2016 in Oakland, California, USA) better known by his stage name Jack Hammer, was an American pianist, singer and songwriter probably best known as the co-writer with Otis Blackwell "Great Balls Of Fire". In 1956 he made his first recording. He recorded albums on Warwick and Polydor, before moving to Europe. Hammer recorded several singles and an LP for the Belgian Ronnex label.1961 he had minor in Europe "Kissin' Twist", sold well especially in Germany, Belgium and France. Jack Hammer wrote songs for Jerry Lee Lewis ("Milkshake Mademoiselle"), Big Danny Oliver ("Sapphire"), The Impacts ("Croc-o-doll") and The Cadillacs ("Peek-a-Boo"). Soft Cell covered "Down In The Subway" in their 1984 single and Marc Almond has sung live few of his compositions, "Switchblade Operator" and "Mean And Evil Me".

December 17, 2011
Jack is one of the most talented artists in every perspective I've ever known - if he didn't have that one weakness, distraction (he knows what it is - it cost him )the world would know him as a super-star today...from song-writer "Great Balls of Fire" and many more to on-stage singing, tap dancing, rope spinning, drumming (understudied Sammy Davis Jnr in "Golden Boy")to writing the eulogy for James Dean's funeral (they were together at drama school)to poet, painter and actor he does the lot...but not a Jack of all trades...he masters them all! If only, Jack...it cost you "Great Balls...and much more..." always your friend...

February 2, 2011
Had good luck to meet Jack in nice restaurant on Sunset Blvd, West Hollywood, on Jan 19, 2011, what a nice guy, told me what he wrote; wish I'd have taken his picture