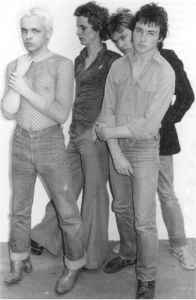 Profile:
Fronted by Gary Numan, with Jess Lidyard (drums) and Paul Gardiner (electric bass), founded in 1977. After releasing the albums “Tubeway Army,” and “Replicas,” (both sold over a million copies) Numan decided to release records under his own name, but with the same musicians. To this day, Tubeway Army and Gary Numan have been a great inspiration to a lot of current electro and techno artists.

Discogs attributes 3 albums, 12 compilations and 15 singles/EPs as releases by Tubeway Army Tubeway Army since the band formed in 1977.

With "Replicas," entering the UK Charts in June 1979, reaching the "Top 10," and eventually the ‘No.1’ position after seven weeks. The album stayed at No.1 for only one week but it did appear in the Top 10 for 9 weeks and within the Top 40 for twenty-one weeks. Overall, Replicas has spent 31 weeks on the UK album charts.

The self-entitled album, "Tubeway Army," spent 7 weeks within the UK Charts’ Top 40. Achieving its highest position of No.14, four weeks after entering the charts in August 1979. The album "For Future Reference," commonly attributed with the band ‘Dramatis’, didn't chart at all.

Tubeway Army has had limited chart success with their 15 single/EP releases. Whilst five have appeared in the UK Charts, only one has had a significant showing. To many, the anthem of ‘The Futurist’ movement, and possibly the most successful forerunner of that era/genre of music, the only single/EP by ‘Tubeway Army’ to reach the No.1 spot is "Are 'Friends' Electric?," (BEGGARS BANQUET – BEGA18).

The four other singles/EPs, whilst accredited to Tubeway Army on the official UK Charts, were released jointly as ‘Gary Numan and the Tubeway Army’ (UK Chart artist listing).

"The Premier Hits," and "The Plan," are the only two compilations, accredited to ‘Tubeway Army’ by the UK Charts, to achieve chart success. Whilst only appearing in the UK Charts for seven weeks combined, both did achieve peak positions in the UK ‘Top 30, singles chart.

March 13, 2020
I thought Billy Currie was in Tubeway Army. He is definitely playing the keyboard in their appearance on 'the old grey whistle test' session during 'are friends electric'. Probably never gets credit for his session work. I also saw him play electric violin for 'the Skids' during a live tv appearance as well. I reckon he's the unsung hero of synth pop. Anyone know anything about this ?
See 1 reply