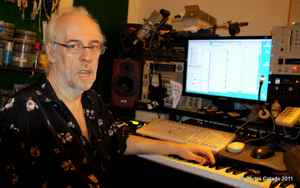 Real Name:
Lincoln Olivetti
Profile:
Born in April 17, 1954. Died in January 13, 2015.
Born in the suburbs of Rio de Janeiro, he began studying the piano as a child, starting his first group at age 13. While in college, he studied music and electronic engineering, dropped out of both courses and eventually used electronics in music, being a pioneer in Brazil. Lincoln lived in São Paulo for a while, where he met with singers Vanusa and Antonio Marcos, and the three collaborated. By the mid-70s he met with the late guitarist Robson Jorge, establishing a solid partnership and making songs recorded by countless artists. In the 80s, Lincoln started to make a reputation as a producer and arranger, especially in pop music (he ran his studios Estúdio Lincoln Olivetti). Stars like Gal Costa, Gilberto Gil, Tim Maia, Jorge Ben, Rita Lee, Roberto Carlos, Caetano Veloso, Maria Bethânia, Angela Ro Ro, Zizi Possi, Fagner, Wando and Joanna (9) are some of the artists he worked for. If on one hand Lincoln enjoyed commercial success at the time, on the other, he became a target for the critics, who blamed him for the decay of the genre. In the 90s, he faced a period of oblivion, being rescued at the end of the decade by artists like Ed Motta and Lulu Santos.
Sites:
MySpace, Wikipedia, allmusic.com, cliquemusic.uol.com.br, web.archive.org
In Groups:
Lincoln Olivetti & Robson Jorge, Trio Los Pôncios
Variations:
Viewing All | Lincoln Olivetti
L. Olivetti, Lincoln, Lincoln Olivete, Lincoln Olivette, Lincoln Olivetti (Moreira), Lincoln Olivetti Moreira, Lincoln, Olivetti, Lincoln-Olivetto, Lincon Olivette, Linconl Olivett, Olivetti