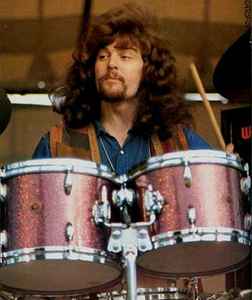 Initially began his career as a session drummer, but quickly moved on and joined The Graham Bond Organisation in 1966, with whom he stayed until 1968, when he briefly joined John Mayall & The Bluesbreakers, before forming his own act, Colosseum, with Dick Heckstall-Smith, and Tony Reeves. They recorded 3 studio albums, but were disbanded in November 1971.

In 1972, he formed Tempest, who released 2 albums before matters came to a close in 1974. Along with Gary Moore, and Don Airey, he formed Colosseum II in 1975 and like the original Colosseum, they too released 3 albums, before they were instrumental in the success of the Andrew Lloyd Webber album, 'Variations'; which reached number 2 in the UK Album Charts in 1978. Later that year Gary Moore left to rejoin Thin Lizzy, and Colosseum II went the way of Hiseman's previous bands. He spent the next sixteen years on various projects with his wife, and saxophonist, Barbara Thompson, whom he had married in 1967, including live appearances, and score writing for film and television. His largest body of work, however, has been the fourteen albums that he recorded with the The United Jazz+Rock Ensemble between 1977 and 2002.

Colosseum were reformed in 1994 for a reunion gig, and have toured several times since. On the death of Dick Heckstall-Smith in 2004, Barbara Thompson, who had been in the various line-ups of Colosseum, joined as a permanent member replacing him on saxophone.

Hiseman's biography, by Martyn Hanson, was released in October 2010 entitled 'Playing The Band'.