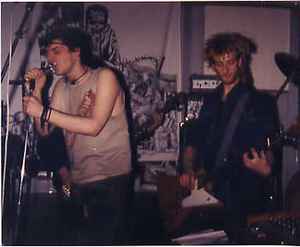 May 13, 2021
Formed: Edinburgh, Scotland, UK
Like M.D.C. and ASF (Anti-Scrunti Faction), the acronym A.O.A. varied from year to year, and could be anything from All Out Attack to All Our Anger, even All Other Acronyms. Anyway, All Out attack was the first choice, and they formed as such in 1982, debuting at Edinburgh's The Nite Club in 1983, supporting The Threats. Musically, their chief inspiration was Discharge, and for a brief period they came as close to equalling that band's power as any group at the time.

As they were best mates with fellow Edinburgh anarcho-punks Oi Polloi, it was no surprise when they recorded a split album together, Unlimited Genocide, which became their sole "hit", scaling the giddying heights of the Indie Top 20, climaxing at #13. The band's defining moment, however, had already been released: 1985's ballistic Who Are They Trying To Con 12" EP (initially planned as a 7", hence the insert).

Their sole "proper" album, Satisfactory Arrangement (1988), was recorded with a new vocalist, and proved to be their last, although they slogged on for another few years, recording a second album (All Out Attack) which remains in the vault.