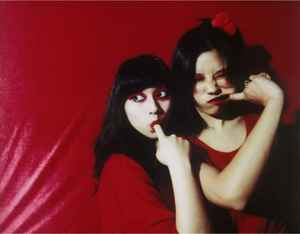 Profile:
"Ultra lunatic" duo from Osaka, Japan. Oni (guitar, vocals) and Pika (drums, vocals) started the band in May 2002 at a jam in the park of Osaka's castle. While their local popularity grew extremely fast, they went to live with the Pigmies of Cameroun in the summer of 2004. They have since often toured the USA, Europe and even Turkey, playing along the likes of Sonic Youth, Masonna, Jojo Hiroshige and Acid Mothers Temple. Afrirampo's lyrics generally consist of simple mantras, when not completely onomatopoeic. On stage, the two almost always appear costumed in red. Disbanded on June 26, 2010. Reunited in 2016.
Sites:
afrirampo.net, Wikipedia
Members:
Oni, Pika
Variations:
Viewing All | Afrirampo
あふりらんぽ