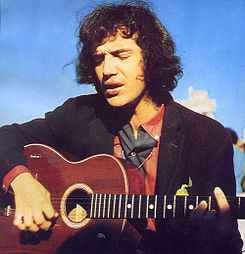 Tanguito was a Rock & Roll and beat musician and composer, known for being one of the first authors to play Rock & Roll in Spanish, and co-authoring the hit song of the era, La Balsa. He was part of the bohemian beat pub of La Cueva, a place frequented by many of the founding fathers of Argentine rock, including artists Litto Nebbia, Billy Bond (2) and Sandro.

On 1968 he made his first single under the alias of Ramsés VII for the RCA, but it didn't sell well and the contract was cut off. The same year, he gave away the song Sutilmente, a Susana to the group Los Naufragos. He composed it when he was 16, probably the first Spanish Rock song ever composed.
He was meant to record an album at Jorge Álvarez's label Mandioca, but it was cancelled because he didn't attend to most recording sessions. He later had his song Natural included in Pidamos Peras a Mandioca, a compilation from the label, which received very positive critics.

He had problems with amphetamines and was, like most Argentine underground musicians of the era, persecuted by the police. On 1970 he was arrested and taken to a mental institution, where he was subjected to electroshock therapy. In 1972 he was declared insane.

Tanguito died on May 19, 1972, in unclear circumstances. Escaping from the clinic in the morning, he managed to reach a train station in Palermo (Buenos Aires), where he apparently hoped to board a train to his parents' home, but he fell on the tracks and was fatally hit by an oncoming train. Some believe he was murdered.

Many of his recordings, some reworked, got released posthumously on the album Tango, in 1973, and then reissued in 1985, during the national rock revival.
Sites:
Wikipedia
Aliases:
Jose Alberto Iglesias, Ramsés VII
In Groups:
Los Dukes (3)
Variations:
Viewing All | Tanguito
"Tanguito", Ramses, Ramses IV, Ramsés, Tango