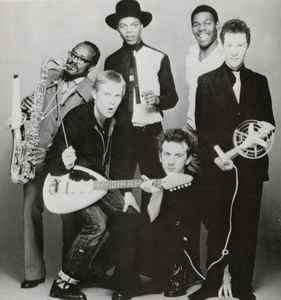 Profile:
2 Tone Ska revival group formed in 1978 in Birmingham, England by guitarist/vocalist Dave Wakeling with David Steele (bass) and Andy Cox (guitar) along with rapper/toaster Ranking Roger (Roger Charlery), drummer Everett Morton and veteran Jamaican saxophonist Saxa (Lionel Martin). As there was an eponymous US group emerging at the time they were forced to use the names The English Beat on their North American releases and The British Beat briefly in Australia.

The band enjoyed immediate chart success and established their own record label Go-Feet Records. After the split in 1983, Steele and Cox went on to form Fine Young Cannibals and later 2 Men A Drum Machine And A Trumpet while Wakeling, Ranking Roger and Saxa formed General Public. Saxa and Everett Morton also formed International Beat, with some guest appearances by Ranking Roger who also joined members of The Specials in Special Beat.

Until recently, two different versions of the band toured fairly frequently: "The English Beat starring Dave Wakeling" (a.k.a. The Beat (8), based in California, U.S.A.) and "The Beat with Ranking Roger" (a.k.a. The Beat (6), which also featured Ranking Roger's son Ranking Junior, and was based in the UK.) The latter group ended with the death of Ranking Roger in Spring of 2019.
Sites:
Wikipedia, imdb.com
Members:
Andy Cox, Dave Blockhead, Dave Wakeling, David Steele, Everett Morton, Lionel Martin (2), Matthew Godwin, Roger Charlery
Variations:
Viewing All | The Beat (2)
Beat, English Beat, The Beat (English), The British Beat, The English Beat

March 26, 2014
Wish someone would list the box set of the first three albums that came out in the UK. I have tried submissions and I always screw them up. It was released in 2013. I bought it through Amazon UK.
Reply  See 1 reply Notify me 1 Helpful