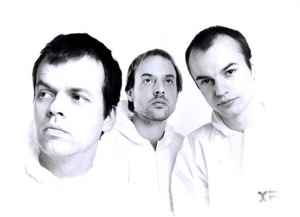 Profile:
In 1998 Xaver Fischer (Keyboards), one of germany´s top session and studio keyboard players founded his first own band with electric bass guitarist Hannes Vesper and drummer Eric Harings.
The trio released its first album on unique records 1999 and played over 300 live gigs in Europe since then. With the second album the band entered the german jazz top 20 for the first time.
The music press calls the sound of the trio "nu-jazz" or "electronic jazz", although there is no sequencing and sampling used. The music is all played live, in the studio as well as on stage, on a drumset, a bass guitar and some analog keyboards.
Two more albums and a remix album followed, and in early 2005 the new album "visit from a goddess" will be released.
Sites:
xaverfischertrio.de, MySpace
Members:
Eric Harings, Hannes Vesper, Hendrik Smock, Krischan Frehse, Xaver Fischer
Variations:
Viewing All | Xaver Fischer Trio
Xaver Fisher Trio, Xavier Fischer Trio