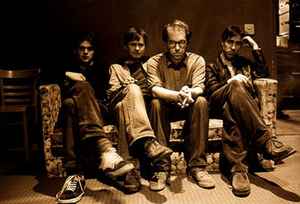 Profile:
Tuesday Weld were formed somewhere around 1991 in Sinsheim by Michael Beckett, Dirk Kretz, Bob Schätzle and Haggy. Being the times they were, the boys were influenced by Dinosaur, Sebadoh, Hüsker Dü, Notwist (when they still kicked ass) and so forth. Along came a Norwegian Horde known as Motorpsycho (also when they still kicked ass) and made it quite clear that a broader sense of musical taste = better music. It was also a time when the boys starting delving into electronic music, post rock (remember?) and Kraut Rock. All these influneces along with drink, psychedelics and the highly under rated (or is it over rated?) advantage of being young and not giving a fuck gave birth to the first album (Herself) which was released by Micha Meier on his Kalletal based Supermodern Records and Tapes and Bernd Spring`s Augsburger based Dhyana Records in 1996. About a year before Tuesday Weld started hanging out with what was stupidly known as the Ostwestfälische Gitarrenschule, ie. Hip Young Things, Sharon Stoned, Locust Fudge etc. This would lead to Michael and Dirk becoming members of Sharon Stoned and some time later, Schneider TM.
Sites:
indiepedia.de, visions.de
Members:
Bob Schätzle, Dirk Kretz, Haggy, Michael Beckett