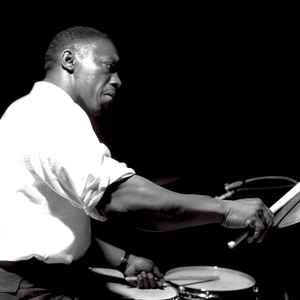 Blakey was the foster son in a Seventh Day Adventist Family, learning the piano as he learned the Bible, mastering both at an early age. In the early 1930's, while gigging at the Democratic Club in Pittsburgh, Arts' piano career came to an abrupt end when he was ordered onto the drums to make way for pianist Erroll Garner. This incident was apparently at the gunpoint of the nightclubs' owner, as Blakey later on often recalled. This served as good fortune and young drummer Blakey came under the tutelage of legendary drummer and bandleader Chick Webb, serving as his valet. Returning to Pittsburgh in 1937, he formed his own band, backing pianist Mary Lou Williams. in 1939, he joined and toured with Fletcher Henderson for 3 years, followed by one year gigging at Bostons' Tic Toc club. Then as a member of Billy Eckstine's band, he played with the likes of Charlie Parker, Dizzy Gillespie and Sarah Vaughan. When Eckstein disbanded his group in 1947, Blakey organized the Seventeen Messengers, a rehearsal band and recorded with an octet called the Jazz Messengers, the first of his many groups bearing this name. In 1948, he visited Africa where he learned polyrhythmic drumming and was introduced to Islam, taking the name Abdullah Ibn Buhaina.

The early 1950's, saw him performing and broadcasting with such musicians as Miles Davis, Clifford Brown, and Horace Silver. Blakey and Silver connected and formed the Jazz Messengers. This band soon evolved into Art Blakey & The Jazz Messengers with Blakey remaining the leader with changing personnel, playing together with them until his death. From 1947 until 1972 he also recorded regularly with Thelonious Monk.