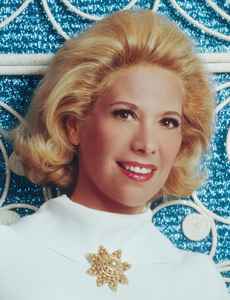 Real Name:
Frances Rose Shore
Profile:
American singer, actress, and television personality. She was most popular during the Big Band era of the 1940s and 1950s.

After failing singing auditions for the bands of Benny Goodman and both Jimmy Dorsey and his brother Tommy Dorsey, Shore struck out on her own to become the first singer of her era to achieve huge solo success. She had a string of 80 charted popular hits, lasting from 1940 into the late '50s, and after appearing in a handful of films went on to a four-decade career in American television, starring in her own music and variety shows in the '50s and '60s and hosting two talk shows in the '70s. TV Guide magazine ranked her at #16 on their list of the top fifty television stars of all time. Stylistically, Dinah Shore was compared to two singers who followed her in the mid-to-late '40s and early '50s, Doris Day and Patti Page.
Sites:
Wikipedia
In Groups:
Dinah Shore And Her Happy Valley Boys
Variations:
Viewing All | Dinah Shore
Dina Shore, Dinah, Dinah Shore With Chorus And Orchestra, Dinah Shore With Orchestra, Dinah Shore and Chorus, Dinah Shore and Friends, Dinah Shore with Orchestra, Dinah Shore, Vocal, Dinal Shore, Mmle. Dinah Shore, Shore, ダイナ・ショア