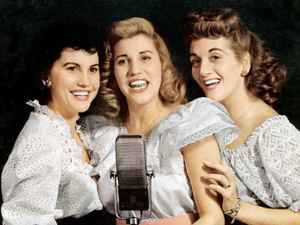 Profile:
Originally from Minneapolis, Minnesota, The Andrews Sisters were a highly successful close harmony singing group of the swing and boogie-woogie eras.

Throughout their long career, the sisters sold well over 75 million records (the last official count released by MCA Records in the mid-1970s).
They had 113 charted Billboard hits, 46 reaching Top 10 status (more than Elvis Presley or The Beatles).

The group was inducted into the Vocal Group Hall of Fame in 1998.