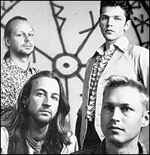 Profile:
Ym:Stammen was an ethnic-influenced post-punk band from Oslo, Norway that was founded in 1983 by Trygve Mathiesen. They had their first rehearsal in Oslo, August 13, 1983. They labeled their music as Nordic stomp with lyrics influenced by philosophy, religion, and surrealism, put together by Mathiesen. The band toured Northern Europe throughout the 1980s and 1990s and Canada (june 1998). Ym:stammen gave their last performance at Blå in Oslo June, 23. 1999.

Over the years their line-up was almost in constant change, so there has been a lot of persons involved, but Mathisen has always been in the band. They called themselfs YM-Stimen when they recorded a track to the compilation album Various - Den Akustiske Gitarliga Presenterer.

The band has had big influence on other bands following in their ethnic-influenced post-punk style as well as some bands into black metal scene.