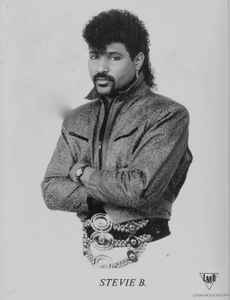 Real Name:
Steven Bernard Hill
Profile:
Singer, songwriter and producer Stevie B. was among the leading lights of the Miami dance music scene of the late 1980s, later reaching the top of the pop charts with the megahit "Because I Love You (The Postman Song)." Born Fort Lauderdale, Florida 1958. He worked a variety of dead-end jobs ranging from car wash attendant to fast food server before scoring his debut hit with 1987's "Party Your Body" which grew from a regional success to national club smash; it was also the title track of his 1988 debut LP, which went gold with the huge success 'Spring Love'. With 1989's In My Eyes, Stevie B. launched his first Top 40 hit, "I Wanna Be the One" its follow-up, "Love Me for Life," soon cracked the Top 30. With 1990's "Because I Love You," he reached the pinnacle of his success, with the single's accompanying album Love and Emotion also generating a pair of Top 20 hits, "I'll Be by Your Side" and the title cut. However, with the subsequent rise of alternative rock, Stevie B.'s light dance-pop sound lost much of its mainstream appeal, and he never again recaptured his previous success, with records including 1992's Healing and 1996's Waiting for Your Love appearing to little notice. The Best of Stevie B. followed in 1998
Sites:
steviebmusic.com, Facebook, instagram.com, Wikipedia, Twitter, MySpace
Aliases:
Hass-C-B, Hassan, Stevie Hill
Variations:
Viewing All | Stevie B
"Stevie B", "Stevie B.", P K.A. "Stevie B.", Steve "B", Steve B, Steve B., Stevie, Stevie "B", Stevie B., Stevie “B”, Stewie B, Stive B, スティービーB, 史提夫 B

Stevie B is one of the most successful Freestyle artists ever. He is still performing all his hits in clubs and I just saw him the other night. I met him once before back in 2003. I even showed him the pic of us from back then and he was really impressed with that and how I was still in the Freestyle lifestyle all these years. He put on a great show the other night, sang live, and still sounds very good. I had him sign my rare 8x10 photo and Dreamin' of Love record before the show while in the VIP area. Pics of all that can be seen on my Freestyle web site as always. Enjoy!