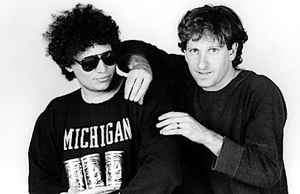 Was (Not Was) also participated in the Spirit Of The Forest project which released a charity single in support of the Earth Love Fund's campaign to help save rainforests.
Sites:
worldwidewas.com, MySpace, Wikipedia
Members:
Carol Hall, David McMurray, David Weiss (6), Don Fagenson, Harry Bowens, Sweet Pea Atkinson
In Groups:
Spirit Of The Forest
Variations:
Viewing All | Was (Not Was)
The Was Bros, The Was Bros., Was (Not) Was, Was Not War, Was Not Was, Was [Not Was]

April 5, 2021
Truly a band that needs to be heard and respected. These records are skillfully played, cleverly written, humorous and touching. Like the best music, they sound better through headphones. They are like the Steely Dan of ... well, whatever they are, which cannot be defined.
Reply  See 1 reply Notify me 2 Helpful