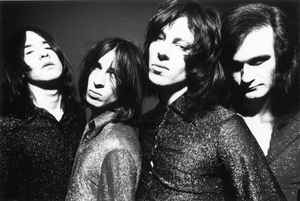 Profile:
English garage/psychedelic rock band, formed in 1985 in High Wycombe. They were part of the early alternative rock scene, releasing two full-length albums and an EP from 1989-1990 before taking an enforced hiatus due to their drummer breaking his back in a car accident while they were on tour in the US. They later regrouped and released a couple more records but never achieved the mainstream success they seemed on the verge of reaching as their similar-sounding contemporaries The Black Crowes did. Their music was mostly influenced by late-60s bands like The Stooges, MC5, The Doors, early Led Zeppelin and Pink Fairies. They remain a largely-forgotten precursor to the stoner rock of today.

Thee Hypnotics disbanded in 1998 but they made a comeback in 2018 and released a box set "Righteously Re-Charged" consisting of all of their studio albums.

"Come Down Heavy" and !"Soul Glitter Sin" are two of the best albums of the 90's, hands down!

They will be discovered someday and my record collection will value overnight!
See 1 reply

February 15, 2012
it should be a crime that this band was/is so overlooked. as anyone whoever saw them live will confirm, they are truly one of the most kick ass bands of that era. their music still holds up too. any stoner rock band worth its salt knows about this band, but they are so much more than that - they are exceptionally musical, diverse, and full of fire (and good taste).

chris robinson (who i greatly respect) produced their last album, the very crystal speed machine, but he could only dream that the black crowes were as down and dirty (and tough as nails) as thee hypnotics (despite what is stated in the band's profile at the top of this page, the two bands sound nothing alike, but they do share a love for the blues). they should've been huge, but misfortune reared its head.

after the split, vocalist jim jones strapped on a guitar (who would've guessed that he can tear that up as well) and started black moses, who put out two rock-solid albums that are well worth tracking down (royal stink and emperor deb). currently, he is fronting the jim jones revue, which is reminiscent of jerry lee lewis with balls (of fire - sorry, i cound't resist!). i was recently watching dave letterman's show and was taken offguard to find the jim jones revue as the musical guest. does jim jones age? he doesn't look a day over 30 and is singing better than ever (check out the black moses song "hot grundies" for evidence).