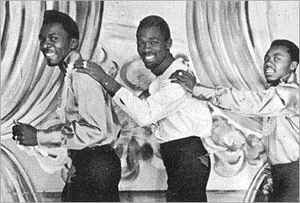 Profile:
The Ethiopians are a ska, rocksteady, and reggae vocal group, founded by Leonard Dillon, Stephen Taylor (15) and Aston Morris. The group started out recording for Clement 'Coxsone' Dodd in 1966. Dillon had previously released some mento songs under the name Jack Sparrow (2). Around late 1966, Morris left the Ethiopians. Having left Dodd, the Ethiopians started recording at Dynamic Studios for the WIRL label, releasing the ska classic song "Train to Skaville", which was their first success. In 1968 they recorded the song "Everything Crash", their first big hit. The song criticised the political situation in Jamaica at the time, such as water rationing and power cuts that led to unrest; such as an incident in which 31 people were shot by police. In September 1975, Taylor was killed by a van while he was crossing a road. Dillon stopped for a while, then continued as The Ethiopian.
Sites:
Wikipedia
Members:
Aston Morris, Leonard Dillon, Stephen Taylor (15)
In Groups:
The Sufferers (2)
Variations:
Viewing All | The Ethiopians
Etheiopians, Etheopian, Etheopians, Ethiopian, Ethiopians, Ethiopions, Ethopians, Etihopians, Etipions, The Eathopians, The Etheopians, The Ethiopian, The Ethiopians From Jamaica, The Ethiopions, The Ethopians, The Thiopians