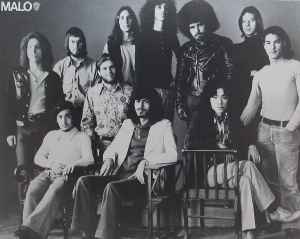 Most will no doubt recall Malo from their singles that peppered pop radio at the time. The most successful of these was, of course, "Suavecito." By the early 1970s, Latin rock, of which bands like Santana and War are prime examples, was just coming into existence. At the time, the word on the street was that another Bay Area band, Azteca, who had been put together by ex-Santana sideman and occasional Malo timbales player Coke Escovedo, were likely to next band that would be able to best take artistic and fiscal advantage of the success of the official Santana Latin rock formula. But it was a group by the name of Malo, formerly calling themselves The Malibus, that stepped up to the challenge.