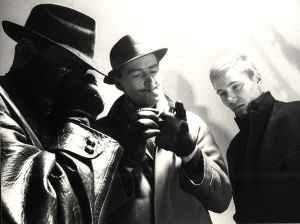 Die Unbekannten (The Unknown) were formed in June 1981 by two ex-pat Brits living in Berlin, Mark Reeder and Alistair Gray, for the legendary "Konzert zur Einheit der Nation" (Concert for the Unity of Germany) held in the SO36 club in Kreuzberg on 17th June 1981.
Their set was hastily thrown together a few days before and the song lyrics were written in the pub opposite the club, while awaiting their soundcheck. One song from their legendary first performance "Radio War", appeared on the album "Licht und Schatten" on Wild Youth Records.

They actually had no name when they appeared at the SO36 and were dubbed by a local journalist Andre Schwerdt as, "the two unknown Englishmen" in a local magazine review and the name "Die Unbekannten" stuck.

They recorded their first successful 12" vinyl "Die Unbekannten" shortly afterwards for Elisabeth Recker's Monogam label.
This controversial three track EP also featured their friend Thomas Wydler on drums. It was a collection of gloomy and politically themed tracks, such as the cold-war classics "Radio War", "Casualties" and "Poseidon" (a bi-lingual song in English and German, about the sinking of a Poseidon nuclear submarine).
The cover artwork acquired for this first single, was a photo of three East German border patrol guards (VOPOS), which had been obtained especially for the EP's artwork. However, it transpired that the photographer hadn't given his permission to also use the picture for other marketing purposes and when he saw the city covered in "Die Unbekannten" posters, he filed a suit against the Label and withdrew his permission for his picture.
After selling a few thousand copies the single was culled from the shelves.

As Reeder also worked as co-manager and sound engineer for avant-garde all-girl group Malaria! Die Unbekannten were provided with the ideal opportunity to tour extensively throughout Europe, as Malaria!'s support act.

In spring 1982, Mark and Alistair were given an early prototype of a Roland 606 drum computer, by a member of The Human League. After a few days trial (writing songs), they immediately went into Harris Johns recording studio in Kreuzberg and recorded "Don't Tell Me Stories" (featuring Renegade Soundwave's Danny Briotett on cooking pot-percussion), and "Perfect Love" for their next Monogam EP "Dangerous Moonlight".
Two more tracks soon followed "The Game" and "Against the Wall" (which again featured Thomas Wydler on drums and percussion).
This melancholic single was a huge success for the band and was probably one of the earliest examples of electronic "darkwave" music.
During the following two years, the line-up changed. Wydler left the band to play with "Die Haut" and the drum machine and electronics completely changed their sound and songwriting style.

In early 1983 they undertook an adventurous tour of Germany, Austria and Hungary, together with "Die Toten Hosen" (where they played together in Budapest's Karl-Marx-University and where some twat stealthily stole one of their Roland 606 drum computers).
The first concert of this mad-dash tour, was for the grand opening of "The LOFT" - in the "Metropol" Berlin's most renowned live venue - and for this gig, P1/E founder member Michael Schauemer and swedish musician, Jeppe Eckholm joined the band.
They travelled in a luxuriously rusty white classic Citroen, driven by a french fried friend and so-called chauffeur "Loic" who said he needed the money.
With all their equipment packed into a big trailer, the weight dragged the rear end of the car down so much, that the fuel gauge was constantly showing they were running on empty.
Naturally, driving on the motorway they had to fill the tank, just to be on the safe side, at every opportunity.
On their way from Bavaria to Budapest, Loic was stopped for speeding through a small quiet Hungarian country village.
He was fined immediately on the spot, but refused to pay.
The polite and patient policeman, asked to see all the bands travel documents and then promptly confiscated them, saying once Loic had paid the 50 DM fine (25 euro today), they could have them back.
They were going nowhere fast.
A long heated argument saw Loic stoically refusing to pay, but after a series of vicious threats to his general health, he eventually capitulated, coughed up the cash and they were allowed to proceed.

They eventually hit the highway to Budapest, but after a hours driving, all the lights on the car suddenly went out! A fuse had blown!
They stopped the car in total darkness. Loic leapt out and frantically tried to exchange the fuses under the hood, in the complete blackness, but then the car still wouldn't start! Were they really out of petrol?
After an hour of standing in silence on the pitch-black motorway, a vehicle was successfully flagged down.
The kind Austrian tourist told them that the next petrol station was "miles away" and eagerly sold them 5 litres of petrol for an extortionate 50 DM. Once fed, the car immediately jumped back to life and after only 2 minutes, while turning a long bend further down the road, they saw the bright lights of a huge service station!
Furious and determined to get their money back, Loic stepped on the gas.
The car just barely made it to the pumps as the Austrian's car was leaving with tyres screeching.
They anxiously indicated to the attendant that they were in a big hurry.
Nervously, he started to fill the tank, there was a clatter and then he worriedly apologised for his slight mishap.
The cars petrol cap had somehow fallen down the side panel of the rear flank of the car and it would now mean that the entire side panel would have to be unscrewed and dismantled.
More time wasted!
It was beginning to look as if the band would never make it in time for their gig in the Karl-Marx University.

Luckily, it transpired they were not so far from the city and they eventually made it just in time and without a soundcheck, they managed to perform professionally in front of a crammed hall, full of screaming and spitting pissed up punks.
Unfortunately, while the Hosen were performing, some twat stole one of "Die Unbekannten's" drum computers.

After the gig, they all invited their fans for food and drink and having spent their hard earned Forints drowning their sorrows in the retaurant-bar of the "Young Artists Club" the Hosen decided to cheer them up by betting the band, that for a crate of beer, their crap car wouldn't make it back to Vienna in time for the next gig.
Frustratingly, Loic (nurturing a hangover and on his best behaviour) drove exactly within the speed limit and the journey looked like it would take forever. Alistair sat in the back of the car frantically re-programming the one drum computer to play for two - the chase was on.
Die Unbekannten arrived in Vienna with ten minutes to spare, to play their gig and bag their crate of ale.

If anyone was under the impression that their misfortune was now over, just before setting off on their way back to Berlin the next day, Loic managed to break the key in the trailers lock, effectively entombing the bands equipment and all food and drink supplies they had bought for their journey home.
After hours of driving and almost starving, they stopped off to visit Radio DJ, Monika Dietl in Munich for energy replenishing coffee and cake. Loic parked the car somewhere outside and they sat for an hour retelling their tour tales of terror.
When it was time to leave, Loic appeared very agitated. He paced up and down the street nervously. Unable to conceal his anxiety any longer, he confessed that the car and equipment had apparently been stolen!
Distraught, they called the police, only to find out to their relief that the car hadn't been stolen, but it had been towed away, because the driver had parked his vehicle infront of the main exit to... the fire station! and that was going to cost him a considerable amount of money in fines and towing costs.
At this pace, Loic was losing money faster than he was making it.

In 1984 the line up changed again.
Jeppe had gone back home to Sweden to recover and Schaumer left to form his own band, Tennis Boy Blues with Yuji Kimura and Monika Dietl.
It was now that two new members were added; Leo Walter and Helmut Wittler, formally of "Soif de la Vie".
The band were asked to play as the support act for a huge New Order tour of Europe and so Mark and Alistair agreed a complete image change was really required, to go along with the new line up, sound and songs and thus Die Unbekannten were transformed into "Shark Vegas"
Sites:
MySpace
Aliases:
Nekropolis (Die Unbekannten), Shark Vegas, The Unknown (9)
Members:
Alistair Gray, Mark Reeder, Thomas Wydler
Variations:
Viewing All | Die Unbekannten
Unbekannte