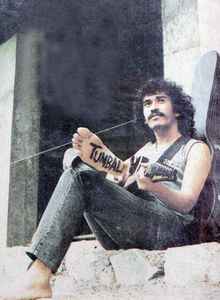 Real Name:
Virgiawan Listanto
Profile:
Biography
Iwan Fals (born 3 September 1961 in Jakarta as Virgiawan Listanto) is an Indonesian singer and songwriter. He has released more than 35 albums of mostly solo guitar-based material in a style said to be influenced by Bob Dylan. He is considered a popular singer in the country. He is known as a social observer and protest singer, although he has sung many songs about love and romance.