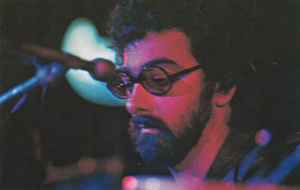 He was an important member of Santana in the 70's, composing some classic hits as "Europa" and "Flor D'Luna (Moonflower)".