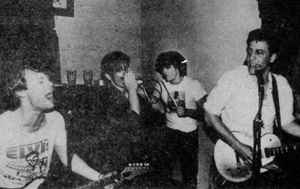 Profile:
Treat Her Right was a blues rock group formed in Boston, Massachusetts in 1984. The band featured Mark Sandman on guitar, Billy Conway on drums, Dave Champagne on guitar, and Jim Fitting on harmonica. Singing and songwriting duties were shared by all but Conway.
In addition to being the forerunner to the popular indie rock band Morphine, Treat Her Right is often credited with helping to spawn the punk-blues hybrid (sometimes dubbed cowpunk, among other titles) that achieved prominence in the early 2000s.
The band derived its name from the 1965 international smash hit by Roy Head and the Traits, "Treat Her Right." The group's self-financed and self-titled debut was released on a small Boston record label in 1986, and their first recording attempt was a modest success - Champagne's "I Got a Gun" and Sandman's cover of James Blood Ulmer's "Where Did All the Girls Come From?" received some play on college radio. "I Think She Likes Me" describes Sandman's experience in a Fairplay, Colorado bar where a woman came on to him. The group signed to RCA Records, who reissued the debut in 1988.

Tied to the Tracks was issued in 1989. Sales did not meet RCA's expectations. In the notes for their third record, the group writes, "RCA decided that if our little basement tape could do so well, why not spend fifty times more money and it will be fifty times better! (They think everything works like that.)" Treat Her Right were dropped from their RCA contract.
What's Good for You was issued on Rounder Records in 1991. The ragged, live-in-the-studio sound was partly modeled on the model established by Chess Records, which had released many classic blues and early rock and roll records. Shortly after this third release, Treat Her Right disbanded.
The group reformed in 1995 under the direction of Rolling Stones backup guitar player Bob Anderson, but disbanded for the second time in 1998.
Fitting later played with The The and The Coots. Champaign remained musically active, playing with groups such as The Jazz Popes. Sandman and Conway went on to form the nucleus of Morphine. Although more blues-based than Morphine, Treat Her Right sowed the seeds of Sandman's later sound with its unusual instrumentation (Sandman's guitar with Treat Her Right was a three string custom model, making it sound more like a bass guitar) and slightly dark focus, most evident on the Sandman-penned songs.
Sandman died tragically of a heart attack while onstage with Morphine in Italy in 1999.
The Treat Her Right song "Rhythm & Booze" was featured on The Hangover soundtrack, released in 2009. In the summer of this same year, The Lost Album, a record of unreleased Treat Her Right material, was released by Hi-n-Dry. Shortly thereafter, the three surviving members reunited as Treat Her Right to mark the ten-year anniversary of Sandman's death at the Mark Sandman Memorial Concert in September.