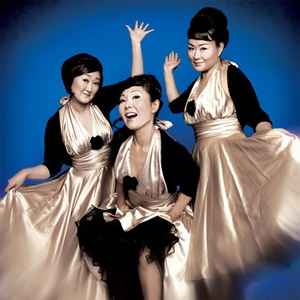 Profile:
Garage rock'n'roll band from Tokyo, Japan. Initially formed in 1986 as a quartet by sisters Sachiko (Drums) and Yoshiko "Ronnie" Fujiyama (Vocals) along with Rico (Guitar), and Yoshie (Bass). However, Yoshie was replaced by Kikako prior to recording their demo ("Golden Hits of..."). In 1990 Rico and Kikako left the band to form Sleaze Sisters. They were replaced by Akiko Omo on bass and saxophone player Gaku was added later. In 1992 they became a trio prior to touring Australia. Bass guitar was taken over again by Akiko, who also previously played in the band during the lineup changes in the early 90's. Guitarist Aya joined the band for several months in 1995. Yoshiko "Yama" Yamaguchi took over bass duties from Akiko before their first big Japanese tour in 1996. Ronnie briefly took a break from the band in 1997 and released the solo single "Coney Island". The band toured extensively during 1998 and 2002 but did not produce any new recorded material.

The band appeared in the movie "Kill Bill: Volume 1" in 2003 after director Quentin Tarantino heard their CD in a Tokyo clothing shop in 2002. The final film features the studio track "Woo Hoo" and it also appears on the soundtrack. The DVD bonus features include a full live performance of "Walk Like Jayne Mansfield" and "I'm Blue" that were recorded during the filming of the movie. The band during the filming was Ronnie, Yama, and Sachiko, however, Akiko played bass on the actual studio recording of "Woo Hoo" used in the film.

Artists I Have Seen Live by maracaden
Female-Fronted by Donut_Duck
SOME Of My Favorite Bands.. In The WORLD.. "Right NOW!! by Andy_Rampage
ΜΙΗΙ·PLACET by cyranojones
Top 120 Favourite Live Acts of All Time by BAHAMABOY
All-Female Bands ♀ by vagdim
Great music, Weird Music, Important Music by Laughing_Chaos
Things I've Seen Live by calialex666
Female-Fronted JP Rock Bands by Peace-Diner
Alternative Rock by eeeben
Artists who perform songs in a film by TwinPowerForce
My Collection by Klimson
View More Lists →