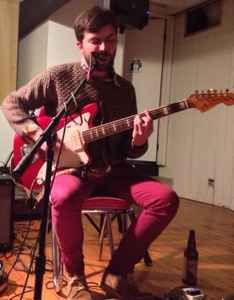 Profile:
Marcus Rubio is a young composer that works in a variety of mediums and genres ranging from pop songs to long form drone works for ensembles of portable fans . He has had his works programmed at Seamus,ICMC, Spark Festival, CEMEC, and EMM. In 2010, Rubio won the readers choice award for “Best Instrumentalist” in the San Antonio Current and in 2011, he won an ATAC Globe Award for best original score for his work on Trinity University’s production of The Bacchae. In 2012, Rubio released/recorded a multitude of records and two of these, Hello Dallas and None of the Birds, were selected as local albums of the year by the San Antonio Current. As a live performer, he’s opened for the likes of Bill Callahan, The Men, and Koboku Senju as well as performed/collaborated with FAUST, W-S Burn, SOLI Chamber Ensemble, Peter and the Wolf, Vinyl Williams, Lee Dockery, Michael Pisaro, Derek Rogers, and Bill Baird. He was also a full time member of both Moth!Fight! and the Cartographers. He has had his music released by Copy For Your Records, Kendra Steiner Editions, Already Dead Tapes, Prairie Fire Tapes, and Test Tube. Rubio is also an active music journalists as a staff writer for Tiny Mix Tapes. He graduated from Trinity University in 2012 and is currently earning his MFA in composition from CalArts.
Aliases:
Mari Maurice, More Eaze
In Groups:
Long Shadow Duo, Moist Flesh, Sunset (9)
Variations:
Viewing All | Marcus Rubio
Marcus M. Rubio, Marcus Maurice, Marcus Maurice Rubio