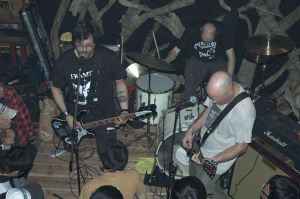 Profile:
When Lärm ceased to exist, Paul, Olav, Jos and Menno decided to call their new band Seein'Red. Menno did not stay long in the band and after he had left, Burt joined on Bas-guitar and Jos became the singer, Olav stayed on drums and Paul on guitar.
After the first recordings, Jos went back on bass and Burt moved on and would start his own bands: profound, Manliftingbanner, Colt Turkey and Dead Stool Pigeon.