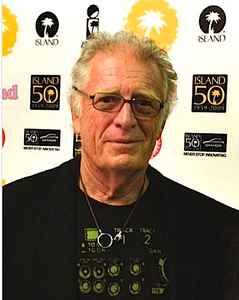 Profile:
UK producer born in London, 22 June 1937. He spent his childhood in Jamaica. As a young man he returned to London, where he realised there was a market for reggae and dub. He founded Island Records to license this music for the UK, and Blue Mountain Music for publishing. Islands first proper signing was The Spencer Davis Group. The label flourished as an indie in the 70s and 80s, introducing Bob Marley & The Wailers and U2 to the world. In 1992, he and Joe Galdo founded South Beach Studios. Island became part of a major in the late 80s. Blackwell eventually handed over the reigns of Island Records to the Polygram label group and formed Palm Pictures. This new company now incorporates several brands, from Blue Mountain Music to Island Outpost (high-end Jamaican holiday resorts).

Inducted into Rock And Roll Hall of Fame in 2001 (Non-Performer).