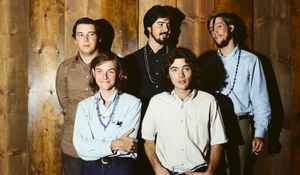 Real Name:
13th Floor Elevators
Profile:
Hailing from Austin, Texas, the members of 13th Floor Elevators were quite possibly the first artists to describe their music as psychedelic. Their lyrics and sleeve notes openly and religiously endorsed the use of drugs (particularly LSD) to alter human consciousness for the better.

The band rattled to the middle of the Hot 100 in 1966 with You’re Gonna Miss Me, anchored by Roky Erickson’s unforgettable yelping vocals, Stacy Sutherland’s guitar, and Tommy Hall’s electric jug runs. According to myth, Tommy’s jug was tuned by the amount of marijuana stored in it.

The group pioneered some of the first garage psychedelia on its albums The Psychedelic Sounds of the 13th Floor Elevators 1966, and the followup Easter Everywhere 1967.

However, Texas at that time was an extremely conservative area that still hadn’t come to terms with 50’s rock ‘n’ roll. The authorities and the police set out to bust the entire band for pot (and—not surprisingly—succeeded).

Stacy Sutherland was jailed. To avoid a prison term, Roky pleaded insanity—a misguided ploy that landed him in Rusk State Hospital for the criminally insane for 3 years. That turn of events spelled the end of the band, although there was a posthumous 1968 LP, Bull of the Woods.